In Defense of Douglas Crockford

Two days ago the tech conference Nodevember announced that they would be removing a keynote speaker from their lineup in an effort to make their conference a more comfortable environment for all attendees.

We will also be removing Douglas Crockford from our keynote speakers list to help make the conference a comfortable environment for all.

This was driven by a small yet vocal minority that used the now effective tactic of crybullying the change they want to see in their industry. Search “Nodevember” on Twitter or read the comments on Nodevember’s original tweet. There’s more confusion and questions about Nodevember’s decision than there is outrage against Crockford.

More importantly, the community’s questions remain unanswered. No official statement was given by Nodevember about Douglas Crockford’s behavior which led to his removal from the panel. Instead, we’re given a statement about the need for all participating developers at the conference to feel comfortable.

Everything I’ve been able to find points to two comments Crockford has made: one being labeled as sexist and the other as slut-shaming. The first comment he made which you can watch here was as harmless as:

“Instead we’re adding a second kind of object which unfortunately is known as weak map. And that’s a problem because nobody wants to put anything weak in their program, right?” * flexes on stage *

The second incident which you can also watch for yourself is where he “slut-shames the web” [1] [2]:

“So the old web was great because it provided promiscuity. It meant that you could go and connect to anything and you’re probably going to be okay. You might get shocked and embarrassed but your machine’s not going to get taken over, your identity is not going to get stolen. That hasn’t always been true but pretty much the web can do that and that’s good because that allows us to get introduced to things. We used to call it surfing. That you could go from one thing to another and discover stuff and start forming relationships. Unfortunately, the same thing which allows the promiscuity to work is very bad for dealing with commmitment. So that’s what the new web is for. You know, once I have found my bank I want to make sure from this point on I’m talking to my bank and I’m not talking to anything which pretends to be my bank.”

What a danger to our industry! Ignoring the complete over-reaction to these two comments a quick search of the word promiscuity on dictionary.com shows that Crockford actually used this word correctly. 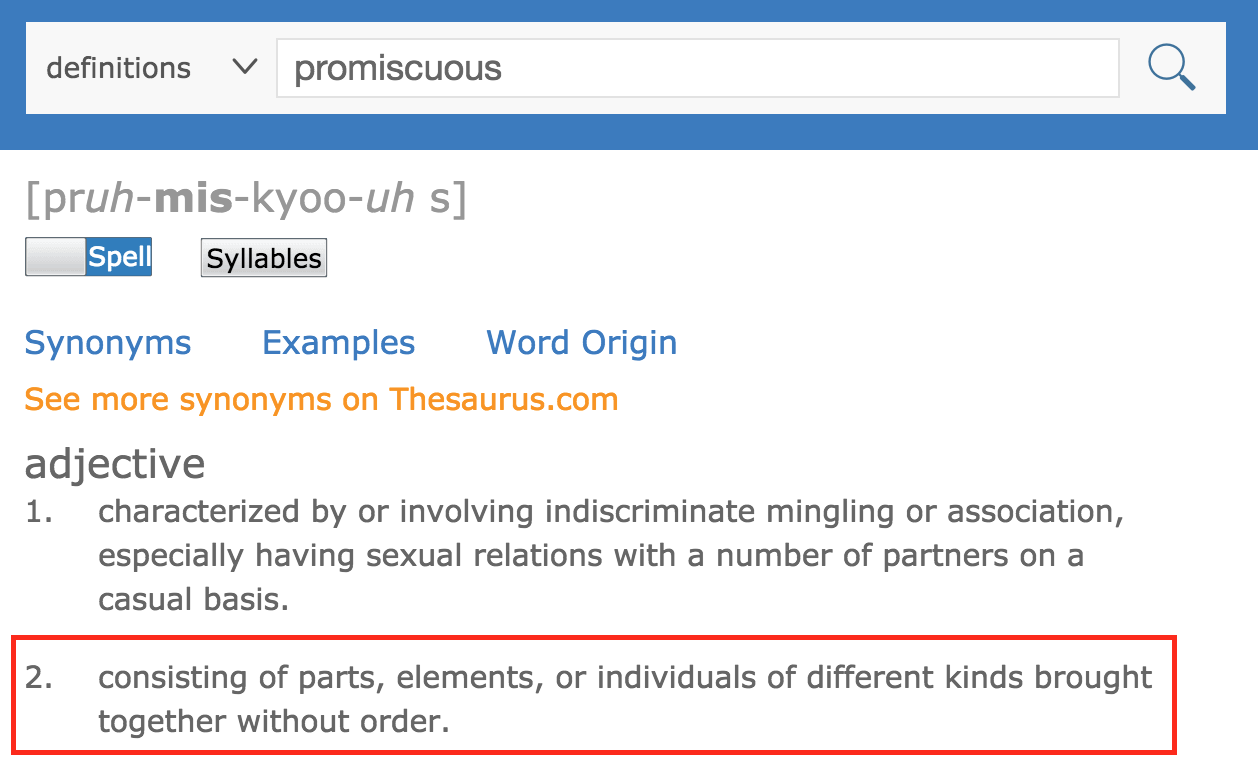 I’ll be the first to admit that the tech industry isn’t always great. It can often be very unfriendly to beginners. The number of times I’ve seen seasoned developers tell beginners, “lol why are you using for loops when you can just use map” is extremely annoying when a beginner barely understands iteration. But when you see behavior in this industry you don’t like, it’s up to you to do something about it.

Kas Perch wrote an article on Medium titled, “Why I won’t be speaking at conferences with Douglas Crockford anymore.”. In the article, Kas describes dealing with Crockford’s “untenable behavior” at multiple events even highlighting one specific face-to-face interaction with Crockford.

“Mmm”. What an effective and helpful way to provide feedback to someone’s unproductive behavior! Rather than confront Crockford directly, we got a Medium article publicly shaming Crockford with the claim, “So I don’t like naming and shaming” within the same article.

It turns out Kas attended Nodevember last year and gave a talk related to community which was defined as, “…the interactions with others that we go through in our daily lives as developers.”

Within this talk Kas highlights the need for empathy “for the betterment of myself and others” with a bullet point dedicated to the importance of speaking up.

You’d think that someone with such passion for building a better community to the point of giving an entire talk about it would be able to muster up a response greater than “Mmm” when the chance presented itself in real life at an event with Douglas Crockford himself.

If this is the conference Nodevember wants, have it. I really don’t care. Create your space where only one or two cishet white men are given the platform to speak. Create your space where comments incorrectly labeled as “sexist” and “slut-shaming” aren’t allowed. But let’s let communities define their communities and leave it at that. If Nodevember doesn’t want Douglas Crockford as a keynote speaker, fine. But let’s not turn around and demand conferences like LambdaConf remove speakers with opinions you don’t like.

How to Start a Podcast

Why Do Art Teachers Suck?

If a kid spends all of their creative time drawing Iron Man and The Hulk, why are they learning about Pablo Picasso on Day 1 of art class? Shouldn't they be spending more time drawing exactly what they want to draw?

Why "Never Work for Less Than $X" Is Horrible Advice

If you're trying to get into tech and you have an offer from a company, do not listen to this type of advice. Don't think back on a Medium article you saw that said developers should never accept less than $70,000 a year because anything lower than that is ripping you off. That may be true for the author, but is it true for you?